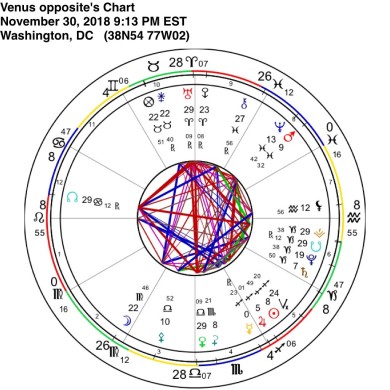 venus will also be shining her brightest on these days. Illuminating the revolutionary energy of women at this time.

A wild uninhibited, chaos magic energy as Venus, the planet of women, love beauty and money at the last degree of LIBRA and Uranus at the last degree of ARIES Retrograde opposition raises Kundalini energy easily. You can have amazing orgasmic cosmic experiences under his electrical transit. It would be good to be with a partner you can trust. Don’t play around with this energy it is very untamable and unforgivable. I had a friend who literally had his brain fried in a Holotropic Breathwork workshop years ago when his Kundalini energy spontaneously activated himself. Do ground yourself in nature.

That’s so synchronous because today November 30 Venus the “Ladyland” in her ruling sign of Libra is opposite Uranus in Aries the “Electric” part.

At the last most critical degrees of the first and the 7th signs. This aspect is a repeat of Venus and Uranus former opposition although in very different signs of Scorpio and Taurus.

In opposition to Uranus the planet that orbits at a 90-degree angle. Uranus creates an electric spark, a lightning bolt, a chaotic wave of energy, unexpected changes, the urge for freedom, liberation, revolution, invention. Uranus rules Kundalini energy.

Uranus in Aries is a pure spark of lightning, energy, ignition, a rocket blasting off, an orgasm, explosion, bomb blast, fireworks, a new flame, a new beginning, initiation, an unexpected windfall, a blast of awakening, a lightning bolt, an awakening, a reinvention, remodel, a new invention, a radical freedom.

Expect crazy turns and twists in your love life. This may feel like you’ve been hit with a lightning bolt through your heart, It’s scintillating, exciting, freeing, liberating. For Libra’s and those with planets in Libra who like to try to remain balanced and peaceful, this may feel like you are having heart palpitations or even a heart attack. Blood pressure may be way up.

Women will be on the rampage for freedom, to be their own person, to be individuals, free, belonging to no man or ideal.

The financial markets will experience radical shifts, be careful with investments.

“I’ve got chills.
They’re multiplying.
And I’m losing control.
‘Cause the power
You’re supplying,
Is electrifying.”-

“You’re the one that I Want’ from Grease is a great description of this energy.

Check out where 29 degrees ARIES and 29 LIBRA are in your natal charts, to find out how this energy hits you personally. Venus and Uranus are also in a Grand Cardinal Square with the North Node at 29 degrees Cancer and South Nodes at 29 degrees Capricorn.

The North Node is where we must evolve to. The Cancer North asks us to choose from our feelings what nourishes, nurtures and makes us feel safe emotionally,

VENUS will also be at her greatest brightness on the 30th and December 1st .

You need to get up very early to see Venus now as the beautiful Dawn Star or Morning Star.

This would be an optimum time to do a ritual with Venus to radically change your relationships, financial status, rebalance your life, break free of old habit patterns, anything you want a complete makeover.