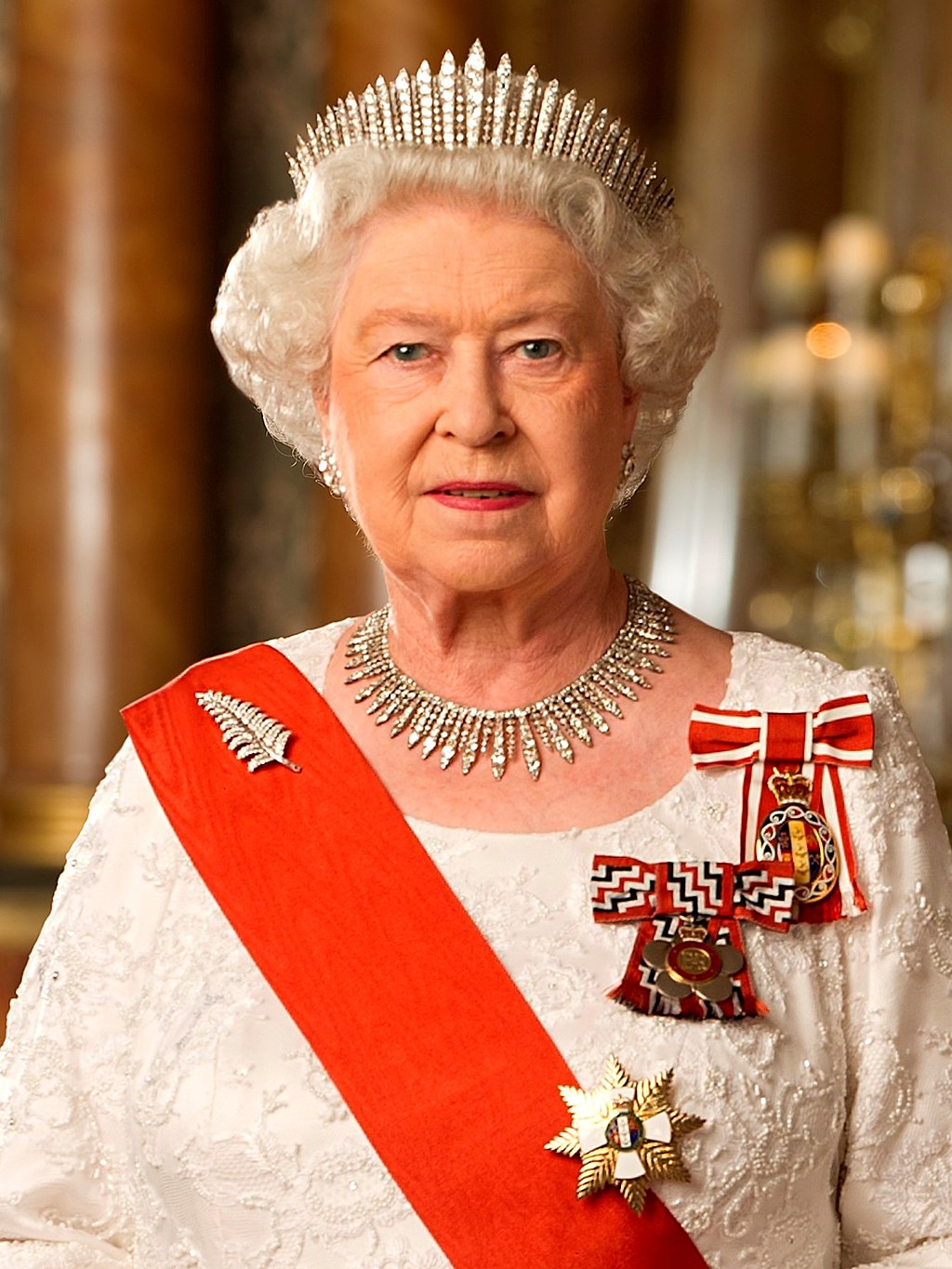 It’s Queen Elizabeth 94th  birthday April 21 and the chaos of the past year and into the present is wholly Attributed to planet URANUS on her Majesty’s 0 TAURUS Sun. You can very easily observe the workings of this one single planet on HRH’s life and family. But wait there’s more.

Let’s look at Her Majesty’s astrology chart and transits. Her Majesty is a TAURUS with her Royal Moon in LEO of course. Her rising sign is CAPRICORN, She is a typical patient rock, a grounding, practical preserving, persevering conservative Ascendant.

The Queen’s  SOLAR RETURN, when the Sun is exactly where it was when she was born, was APRIL 19th at 8:49 pm. 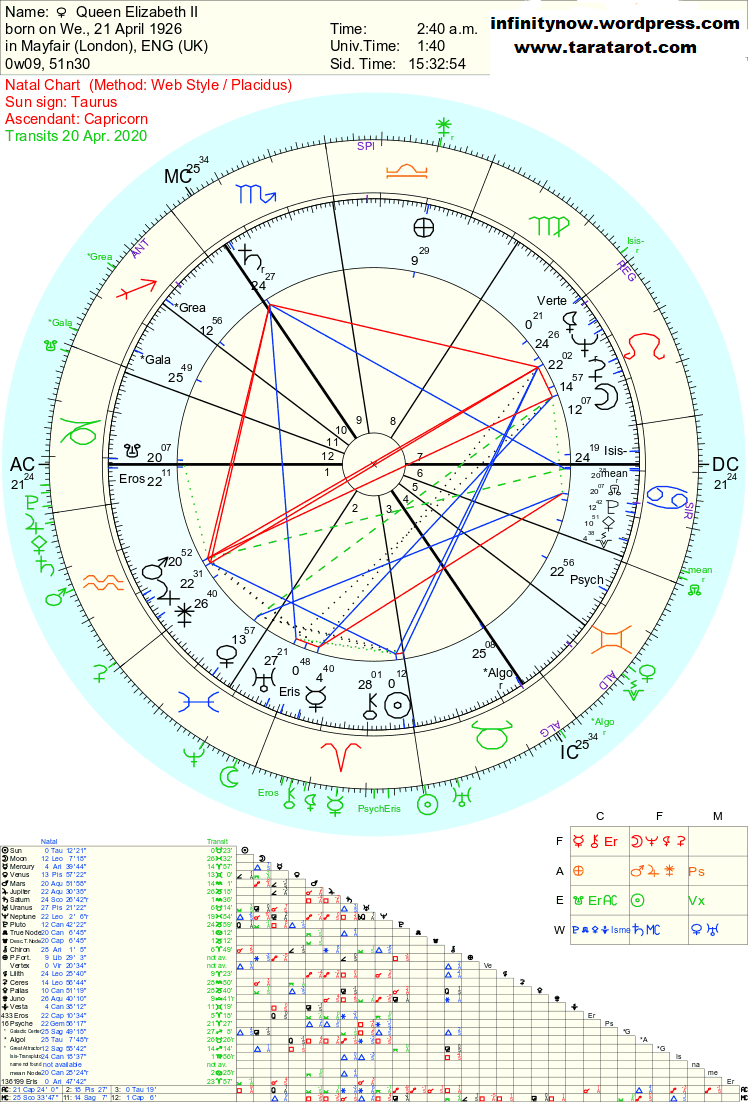 As you know, Her Majesty’s family life has been chaotic since 2018 when Prince Harry, the Queens much loved ginger ex-Army flyer, Grandson fell head over heels in love with the woman of his dreams who also had every strike against her from the traditional British standpoint. American actress Meghan Markle stepped on the Royal Carpet and things went sideways.

Long story short, Harry and Meghan divorced themselves from the Royal family suddenly-That’s URANUS energy, in January, which I know the Queen was not happy about. Her other son, wayward Randy Andy was a frequent flyer to pedophile Jeffrey Epstein’s pleasure island and has disgraced the Royal Family. Three working royals are now out of commission. The country is having to deal with Covid-19 like the rest of the world.

Because of the Chaos created partly by PLANET URANUS which governs unexpected chaos, rebellion, conjuncting the Queen’s Sun. Her Majesty has to cancel all the usual parades and will ZOOM -Uranus rules rebellion, freedom and the internet and social media, her family for Birthday wishes. At 94 the Queen is up to date with Uranian technology.  Two of her grandchildren divorced. Oh and her country divorced the EU. The Prime Minister just recovered from the Virus.

The famous Saturn-Pluto conjunction of January 12, 2020 at 22+ Capricorn occurred RIGHT ON the Queen’s rising sign/Ascendant. That’s a heavy, rebirth restriction energy. Heavy responsibilities and breakdown of the old “business as usual” has been in effect. These planets also inconjunct -{150 degrees} to the QUEEN’S NEPTUNE in LEO. The queen is blindsided. This means her dreams, faith, and projections have been limited and shattered.

Now Saturn, Jupiter and Pluto will all square the Queen’s CHIRON the Wounded Healer at 28 ARIES, which can alternate between health issues, feeling vulnerable and defensive. JUPITER AND PLUTO together is th “billionaire’s transit”and the Queen is one of the richest people in the world. But these two planets also bring death and destruction in her 2nd house of values and resources, Harry and Meghan were big assets to the Institution. Pluto rules the soul’s path and the Queen is dedicted to being the warrioress, the Aries leader and never give up.

SATURN, planet of limitations, testing, obstacles, time, endings,seniors, leaders, father figures, patience, buildings, corporations, is also squaring HER MAJESTY’s SUN on her birthday. This makes for gloomy, heavy, limitations. The Queen although robust and healthy may be feeling rather tired these days. She has dedicted herself to being Saturnine her whole life. This can also give her more stature. if thats even possible.

The Lunar Eclipse on January 10 was at 20 Cancer exactly conjunct her Majesty’s North Node, her Highest spiritual and evolutionary goal, at the same degree in her 6th house of service, health, community and pets.This was a very karmic echo of losses in her childhood, her mother, other women in he rfamily and most certainly of- Princess Diana and sentimental issues.

Things will improve on the historic December 21, 2020 Grand Conjunction of Jupiter and SATURN at 0 AQUARIUS and this will balance out and boost Her Majesty’s energy. There may be a renegotiation between Prince Harry and the Queen because they had a one-year consignment of their leaving their royal working roles and a re-do if necessary. I dont feel Harry will be turly happy in America. I know he will do everything for his wife and son. But he is really a fish out of water. He has sacrificed everything for Meghan and little Archie. He misses his royal duties. Everything he knew is gone.

The transit of SATURN in Capricorn is also in good aspects to her Majestys Natal Saturn in Scorpio at 24 degrees Retrograde right on her MC. The Queen is stalwart in her dedication to her country.

July 4/5th LUNAR ECLIPSE at 13 Capricorn occurs opposite the Queen’s Natal Pluto in her 6th house of health, harvest, family, Lunar eclipses are more internalized and this can affect the Queen’s health or the health of Prince Phillip or someone else in the family. It can also bring another child into the family.

JUPITER planet of expansion and optimism will move swiftly in Aquarius and touch the Queen’s MARS later in 2021. She is really the ideal of the traditional Aquarian, she can be modern in a traditional way. She would really like to be freer than she appears. That transit of Jupiter is a big jolt in the arm and it activates her natal T-square with Saturn and Neptune, This indicates beneficial expansive energy, and a more spiritual essence in her life.

URANUS will move along and square the Queen’s moon in late 2021 and into 2022. The Moon is her emotional safety, her home, her children and her roots. Things will be more unstable for her family again. Uranus brings shock. This may mean her dear husband Prince Philip passing on suddenly.

I find it fascinating that the Queen has Asteroid EROS on her CAPRICORN RISING Sign conjunct her SOUTH NODE. She has held down the fort before so to speak. She is turned on by being the head figure. The Matriarch who has restored the longevity and power to this ancient 1,000 year plus Monarchy.

As a Canadian we honour the Queen, her face adorns our money. I grew up singing God Save the Queen every morning in public school. I feel blessed to be living in the time of have the longest reigning Queen in history. I can’t imagine there ever will be a KING.

MANY HAPPY RETURNS to the QUEEN.

Like Loading...
Women love and money are freed up and unbound as of May  5th as VENUS goes OUT OF BOUNDS @ 12 degrees Gemini opposite to the Great Attractor and squaring Neptune her higher octave until June 7 where she “rebounds” under the Sun’s yoke again @ 22 degrees Cancer.
OUT OF BOUNDS
A planet is considered out of bounds when its declination is beyond the outer boundaries or limits of that of the Sun- greater than 23 degrees and 27 minutes of declination, either North or South. The energies of any planets moving OOB planets means the same thing as in sports- being beyond or passing the limits or boundaries of a field, course, or in planetary terms beyond the Sun’s path tends to be loose- freed up, uncontrollable stretched, or over the top during these periods.
Venus uses her “get out of jail free” card to do her own thang. Love means freedom and expansion of the heart. This can indicate more love and more heart energy. That’s a good thing. Free up whatever is heavy in your heart. This is like the prayer to the Ancient Egyptian Goddess Ma’at. To the Ancient Egyptians who after death believed that your heart is weighed against Ma’at’s ostrich feather diadem on the scales of Justice. If your heart is heavier than her feather then you must return to earth and be reborn. If the scales balance perfectly and your heart is as light as a feather then you are free to go on into the Universe freed from the karma of rebirth. I’ve always loved that story and image.
Personally-Your Love life
Well, women just gotta be free. Girls just wanna have fun. Crazy love time. These Boots Are Made for Walking. Don’t Fence Me In- a song you can yodel too!
If you are feeling stifled in a relationship Venus OOB will give you courage and the strength to leave. As she turns Loose in GEMINI the urge to have open relationships is much higher for all genders. This could be a time to expand the limits of what feminine energy means. But do be aware of double talk and double entendres. This can also indicate the opportunity to get pregnant with twins will be higher. I just channeled that info.
Marriages
June is traditionally the month to get married in but getting married under an Out of bounds Venus may not be the best idea. Women must be given full reign to express themselves in any contractual arrangement during this time.
The Rebound
Old lovers may rebound back into your life now. Be careful of this as it may not be the wisest thing to do. Also, don’t rebound into another relationship. This is a time to explore your options.
As Venus moves through Cancer May 19 the Day of the Royal Wedding she crosses the World Point and the sign of motherhood and nurturing. It can indicate the opportunity to get pregnant unexpectedly will be stronger too.
Check where these degrees 12 Gemini to 22 degrees Cancer fall in your natal chart and circle it. Check out if Venus OOB conjuncts squares opposes or inconjuncts any planets angles nodes asteroids or other points in your natal chart.
For Venus ruled Taurus and Libra Venus OOB will affect you more strongly.Check out where these signs are in your astrology chart and which houses are affected which shows in greater detail where the loose woman energy is impacting you and your love life.
This will tell you what is being affected and where. If you need help to understand how to work with an OOB Venus in your love life. Get a reading with me-http://www.taratarot.com
FEMINISTS
Women will be definitely be demanding more freedoms and refuse to be chained down during this period. It just came to me that LILITH is a permanently unbound woman.
Venus rules money and finances.
Expect a wild and crazy ride in the money markets too under Venus  “loose woman” status.
Venus governs the sign of Taurus. Uranus enters Taurus May 15
This adds an additional layer of chaos to this ingress. A further unexpected chaotic element is added to the Royal Wedding as well as its meaning and outcome. The  “urge for getting out of dodge” energy. All feminine energies are freed up during this period. What do slaves do once they are freed?
Please share widely
all writing is copyright of Tara Greene
Get a reading with me http://www.taratarot.com

May Tarot Astrology Preview for the Cosmic Intelligence Agency

May 15 URANUS enters TAURUS and the whole month is connected with this energy.