I have been on a spiritual healing road trip since Aug 31 on that very powerful Pisces Blue Moon.  A lot of people tuned into my meditation at that time I found out and I am grateful because we all need to really be working through our old stuff and going deeper and deeper into the new dreaming awake reality. Time is speeding up and we’re almost at the Autumn Equinox.

I went to Las Vegas to see Stuart Wilde present Spiritual healing The Second Chance workshop over labour day weekend, This was my 3rd such workshop with Stuart and the Tolemac club. 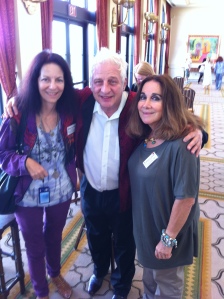 I signed up for both healing workshops. My dear friend who I had met in Las Vegas originally at Stuart’s workshop in 2007 came again from Rome to meet me.

There were about 500 people at the first healing and 300 at the second.

Stuart claims he has the Christ healing light ,a violet ray that comes through his hands. He also says he gets extremely anguishing painful stigmata in his hands as does his fellow healer , the Hooded Sage Kris Krepcik who was also speaking at the workshop.

Stuart did all the healings himself. Before dinner break before the healings started Stuart touched each person for 10 seconds to drive out the ghouls and get the process started.

He had a kind of invisible bus set up on stage with double rows of 8 seats lined up on stage. he started at around 10:00 pm and went till 1:00 am or more. He blew love energy from his heart onto the folks’ crown chakra’s. Then he had his hand on their shoulder’s and would recite a special Gaia prayer which sounds ancient Gaelic and Latin.

There were many people who were very ill, some in wheel chairs paralyzed, some very old and sick looking, there were all ages and types of people.

The healing was very fast – 3 minutes a person. If anyone had  a serious physical illness Stuart asked that they tell Tom who was managing the whole event and Stuart would ask these people to come back and he would give them additional healing time but quick another minute or two.

I felt Stuart’s hands were very powerful, hot. When I did the first healing I immediately felt very blissful, peaceful as if all the cares in the world had  simply disappeared. It felt so gentle and blissful.

My friend had ver bad ezema like itchy sore spots all over her hands, they were  diminished and almost gone right away and stayed away.I have an after photo but didn’t think to take a before one.

I have since had this sensation of heat pouring through my body. It’s NOT MENOPAUSE. Stuart calls this the Celestial Heat it comes from Grace, from Gaia herself, and it burns off the old coldness of the ego mind and protects one from the ghouls.

Stuart is the only person who speaks of individuals being attacked by ghouls, all types of negative entities all the time. Stuart claims that the work he and his colleagues have done with the help of the Aluna world higher dimensional beings themselves – they have been fighting an Armageddon in the Aluna or mirror-world for many year s now. IT is Judgement Day as in the Book of Revelations but it is happening on another dimensional plane About 3 feet away from us but n a higher Dimension.

Stuart says you cannot get into the Aluna higher dimensions unless you are a complete Vegetarian though. I know he has been an animal rights’ activist form any years. He said how can Gaia the spirit of the Earth help you if you are eating one of her children? We are all her children, the animals the rocks and tress and humans are not the highest consciousness.

So it is easier for all of us now to access higher consciousness because many people are less demoniacally controlled, especially if you are seeking the Divine Feminine energies, getting out of ego-tick-tock as Stuart calls it, becoming a Fringe Dweller.

I feel very tuned in and being in Sedona here always amps up my spiritual antennae. Many Iterdimensonally beings have been communicating with me now. It is only helpful if they can give me some good helpful info that can help others,

I have done some long distance readings since I was here but mainly meditating a lot. Many times a day, for long periods.

So if you wish readings and healing energies from me, I am red-hot or rather ultra-violet hot, every time I close my eyes I see the ultra violet ray spotlight come on.

This is 6th chakra energy, the pineal gland. The seat of the Soul, in some ways.

There was also a beautiful white owl that flew to watch the healings that Kris was doing with his students in the evening one night.

Stuart talks about working with the Aluna animals the white  Lion, the white owl the Unicorns. So call these animals in to you.