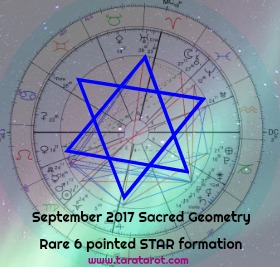 This configuration is created between the planets stars and the Nodes of the Moon which was in place widely at the TOTAL SOLAR ECLIPSE of AUGUST 21. It is focussed  stronger now at the Pisces Full Moon and will continue to guide us through the next New Moon in VIRGO Sept 19-20 and the EQUINOX September 22/23 until the end of September.  This is a very long time for this aspect to be in place.

As the planets are always in constant motion the 6 pointed MERKABAH or Solomon’s Seal is a very potent magical symbolscape to work with.

The ancient 6 pointed star represents the “AS ABOVE SO BELOW” Hermetic wisdom of Thoth or Hermes Trismegistus or Mercury the ancient wisdom teacher of Egypt. Most people associate this symbol with the Jewish people but they borrowed it from ancient India and Egypt and took it on as their own symbol.

The Merkabah symbolizes  the interconnection and balance between Heaven and Earth within our own masculine and feminine sides. Why is it so important?

The Universe is conscious and  mirrors back to us synchronous signs all the time. This is a Rare and very long constant guiding STAR to help us activate the Divine Love that is the very nature of the Cosmos.

Composed of a GRAND FIRE TRINE with planets/Node in ARIES LEO and SAGITTARIUS and a GRAND AIR TRINE of planets Node and a Star in GEMINI LIBRA and AQUARIUS this is a Masculine active Merkabah energy.

Created by the 6 sextiles -60 degree angle aspects between

sextiling the SOUTH NODE of the Moon at 24 degrees AQUARIUS

which completes the 6 pointed star as it sextiles the North Node in Leo.

The 6 pointed star didn’t leap out at me until I realized that the invisible point was POLARIS our current North pole Star. The term NORTH STAR symbolizes humanities greatest guide as North always symbolizes higher wisdom. The Chinese considered Polaris to be ” the great honorable Lord of the Heavens” according to Fixed Stars and Their Interpretation by Elsbeth Ebertin 1971 pg. 28.

Venus entering the configuration will further strengthen and amp up the love. Be sure to tune into this aspect from the 12-17th and MEDITATE every day for at least 12 minutes on this aspect. The cosmic energies available will be powerful for those who do. I will set up a world-wide meditation page on FB as I feel called to do a live ZOOM meditation STAY TUNED>

September 17th/18th when Venus TRINES URANUS along with the MOON.

Sept. 13 the GEMINI MOON adds its energy and influence.

Sept.17th the LEO MOON amps up the fire power

We need to have as many Lightworkers and conscious seekers aligned to this SACRED MARRIAGE Symbol cosmic guidance now to help bring about the balance of the Masculine and Feminine within ourselves which is so desperately needed to bring balance into the world.

Look at where each of the 6 points of the star falls in your own astrology chart to see what each planet Node or star has to offer and to ground its energy into your own physical spiritual mental emotional body.

In spite of all the crazy tempestuous energy going on around the world literally and tragically with record setting Hurricanes in the U.S. and the Caribbean and in India Bangladesh and Nepal and other political and environmental struggles this sign is a very positive sign from the Heavens.

Please join in to align yourself with the perfect symetry and synchronicity of Divine Guidance Divine Timing and Divine Love that the cosmos is bequeathing us with. As above so below so within and so all around.

PLEASE SHARE WIDELY all writing is copyright of Tara Greene. You may repost with links back to this site.

Get a reading with me www.taratarot.com 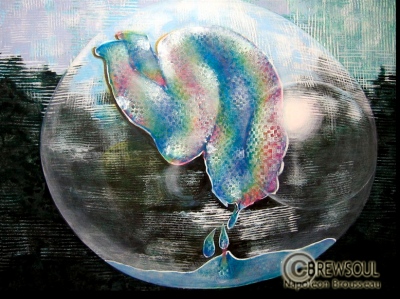 The Full Moon in Pisces Sept. 6 marks the completion of the Moon’s journey through all 12 of the Zodiac signs. A full Moon is a fullfilment of the Moon’s cycle The Pisces Full Moon marks the time for spiritual completions forgiveness and compassion @ 12:02 am PDT/3:02 am EDT/8:02 am GMT.

After the Intense Fiery energy of the Total Solar Eclipse two weeks ago we are now cooling down the passions in a watery blissed out state.

There is still the Grand Fire Trine of North Node in Leo with Mercury on the eclipse degree trining Uranus + Eris in ARIES and SATURN + LILITH in SAGITTARIUS which may also super heat the emotional spiritual soupy nature of this lunation to a boil.

NEPTUNE the planetary ruler of PISCES is conjunct the MOON @ 13 degrees. There is a super powerful T-square from the Moon and NEPTUNE and the Virgo SUN to The GREAT ATTRACTOR @ 14 degrees SAGITTARIUS.  Known as Abell 3627 we don’t know exactly what it is but it sucks in so many galaxies that it actually bends light around it. Not quite a black hole more like a Quazar it has a strong ultra-violet shift.

Intuitively this powerful very spiritual FULL MOON feels like a Violet Flame in the darkness to help lost souls find their way.  This is a time of spiritual and karmic completions on all levels emotionally spiritually and physically as the Sun is in Virgo and Saturn in SAGITTARIUS the planet of karma and endings squares the Full moon and the sun.

Pisces is the sign of releasing flowing letting go compassion and forgiveness. The hard karmic lessons that Saturn in Sagittarius has been delivering to all of us may be fully felt from the depths of our beings. You will be feeling very emotional super sensitive and wanting to be quiet in retreat and turned inwards in meditation at this time.

Your psychic energies and telepathy will be extra strong as will your dreams. Saturn’s lesson is to make sure you face reality and have strong boundaries. This is one of  PISCES biggest hardest lesson on the earth plane. For many, this will be difficult. Pisces tendency to avoidance through denial fantasy delusion; guru and glamour worship and all addictions are a major issue that must be faced head on now. The opioids disaster in the U.S. is out of control. Millions of people are on anti-depressants kids are full of drugs for ADD ADHD and autism. The real wounds that are souls are suffering must be recognized and the avoidance of the real pain and suffering must be fully felt in order to heal.

SATURN is the karmic cosmic cop and he ensures that you will hit the wall for however out of balance you are with your true self your HIGHER Self denying your soul’s pain. The cost may be terrifically high. Sometimes that’s what it takes.  Remember that the LEO Eclipses shadow is pride arrogance ego and that will take a beating now.

A.A. works because when we take Saturn responsibility for creating suffering in our lives then  we ask forgiveness we find peace when we “give it up to spirit.” Alcohol means spirit. Spirit always works through puns.

PISCES and VIRGO teach humility being of service to our communities and to Spirit. Face the music be mature enough to name your demons and to be compassionate with your human self and to connect with spirit authentically with the Source from which you were birthed and to which you will return.

Spend time near water around the Full Moon. Have a ritual bath with rose-water or lavender oil candles incense and soft music. Immerse yourself and drift back to being in the womb of your mother and connect to the Holy Womb of the Divine Mother who births all. The unconditional love of the Great mother will soothe and heal you and help you to know you have never left Her.

Pisces is the sign of the dream and the dreamers. Life is a dream. It is the dream our souls are having which we think is “real life.” When we are “awake” we are still dreaming. The key is to wake up in this dream called life and realize you as the dreamer create it all.

Pisces is the sign of artists creativity music dance film and photography. Spend some time while the moon is still full painting with water colors allowing your soul to express whatever it feels. Keep track of your dreams. Sounding authentic movement past life regression and energy healing fit perfectly.

There is a Rare 6 pointed STAR at this Full Moon. North Node and Mercury in LEO sextile Jupiter in LIBRA sextile Saturn in SAGITTARIUS sextile the SOUTH NODE in AQUARIUS sextile URANUS and ERIS in ARIES sextile to the North STAR in Gemini sextile back to the North Node.    This is a very powerful image of balancing the masculine and feminine and creating the Merkaba light body vehicle to connect with our higher Holy selves.

Use this Full Moon to vision quest to meditate to dream with to clear a path for new soul growth and expansion. Put your crystal out under the Full Moons light to receive the energy.

Get a reading with me www.taratarot.com