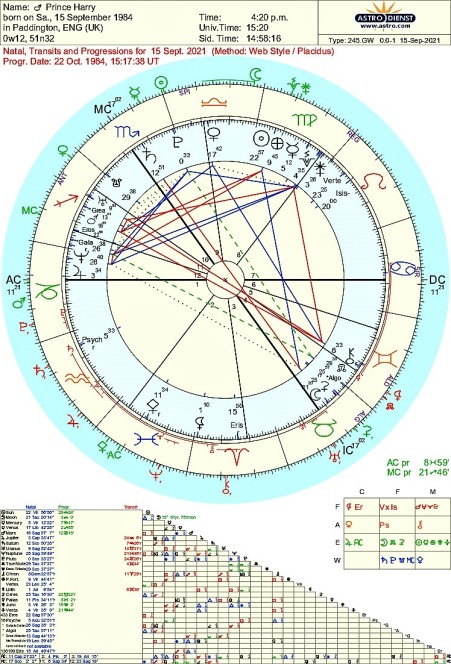 Happy 37th Birthday Prince Harry. After I wrote this Harry and Meghan were named as amongst the Top 100 most influential people in the world by TIME Magazine. A nice birthday gift. i am sure the British Press are furious but it was obvious they were going to be celebrity Royalty. Meghan figured that out from the get go. I remember writing that they were partners in crime together.

Here are The astrology transits of your Solar Return.

In 2022 you will be feeling vulnerable in public as Chiron the Wounded Healer is square you’re Rising sign your persona and appearance.  You will be having a once in 18+ years Nodal return, with the emphasis on the 4th House of family, your wife and children, and on your childhood and the Queen. Neptune is still opposite natal Neptune, you’re in La La Land literally. The spell will break later in 2022. You may feel very confused. It also is a very charitable, self-sacrificing transit but you will have more boundaries after this.

You’re heading into a Neptune square Neptune transit, an early mid-life transit. Also Pluto in Capricorn squares Pluto- a once-in-a-lifetime and a generational transit too. Issues about power, history, publishing, philosophy, and travel are all in the works.

In November 2022 there will be a karmic head-to-head with your father and your position of power in the world and also issues from your grandmother the Queen. You are growing up and being a force in the world. Restrictions and obstacles. Can be a challenging time.

Harry’s progressed SUN is moving up to conjunct Natal Pluto within a year in his Natal 9th House of foreign affairs, the military-his Invictus Games, publishing, philosophy, truth, sports, animal rights, teaching, naivete, and good humour. Any planet at the 29th degree is considered critical. This marks the very end of Harry placating others and seeming nice. No more Mr. Nice Guy to those that don’t deserve it.

The Progressed SUN will also be squared by Transiting Pluto in 2022-2023 and beyond. This is all about power and control, secrets, Plutocrats, danger, the shadows, big wealth, detectives, sex, control, death and rebirth internally and externally when one is dealing with Pluto. These could be major transformation issues facing Harry from people he is close to, outside of himself because of his own soul transformation.  He may reveal what he knows, causing incredible danger to himself, Meghan and his family. This is something I have sensed for awhile. I do hope they are all kept safe.

Harry’s Progressed MOON which is his most intimate feelings, his emotional safety barometer, what feeds him, his literally home, childhood and family is at 3 degrees LIBRA in his 8th house of death and rebirth. This points of course to his wife Meghan and the need for him to have balance in his life. Emotionally he wishes he had peace with his past, his brother and father, extended family and his past and his own family. I think this hurts him very deeply that he has been cut off by his father and his brother and that he had to cut them off too, maybe unconsciously even.

The Moon is the Mother figure and of course Queen Elizabeth was a substitute mother after his dear mother Princess Diana passed away as well as a loving grandmother. This can indicate the Queen’s death too.

The Progressed Moon moves 1 degree a month. At his birthday in September 2022 his progressed Moon will be on his Venus in Libra. This can be an olive branch extending time. It can mean a partnership for women’s causes and something to do with the arts and Meghan too. The Moon is fertile nurturing and mothering. Harry should be feeling happier and more peaceful than he has ever been in his life. He will be deeply involved with shared parenting and especially in love with Meghan and Archie and his lovely little daughter Lilibet.

My intuition keeps saying that Harry and Meghan will have a third child even though they publicly stated they would stop at 2 because of world populations issues. Progressed Moon on Venus suggests to me another child because of their Love. We will see. As they just welcomed Baby Lilibet in June of 2022. Meghan would not likely get pregnant again so soon but could potentially around Christmas of 2021.

Progressed MARS has been sitting on Harry’s AC Rising Sign since 2020 when he and Meghan left their public Royal duties coinciding exactly with the Saturn/Pluto conjunction January 12, 2020. Harry is angry, he is defensive and to be a protective soldier for his wife and Archie against public attacks by the British Press he choose to move to the “other place” his DC which is 11 degrees Cancer which is conjunct to the U.S. SUN and the fixed star SIRIUS. Now tell me you don’t believe in Astrology.

Progressed Jupiter in AQUARIUS has been squaring the Nodes of Fate -his North Node in TAURUS 29 degrees and SOUTH NODE in SCORPIO already in 2021 and will create good humour and optimism but tension at Christmas this year.