HAPPY SPRING equinox to those in the Northern Hemisphere. And Autumn down under

this astrology chart shows the basis of the year ahead.

Please join me LIVE on FACEBOOK on my Page Tara Greene Tarot Psychic Astrology Friday March 20 at 5:30 pm PDT/ 8:30 pm EDT and Saturday March 21 at 12:30 am GMT i will be talking about 2020, Covid-19 and answering questions about your astrology charts, Join me. https://business.facebook.com/Tara-Greene-Tarot-Psychic-Astrology-Consultant-193065840714514/

Based on Washington DC, the Scorpio, Rising is a signifier of death and rebirth, overhauls, power, secrets, finances, darkness and control. Scorpio as the 8th sign is an inward yin emotional sign. With Mars and Pluto virtually conjunct ruling this chart in Capricorn along with Jupiter Athena and Saturn at the last most critical degree of Capricorn this is one tough chart. THE SUN is also at the very last degree of PISCES, the end of the Zodiac, and they sextiles This is a life and death battle. There can be hidden agendas going on outside of the obvious limitations. 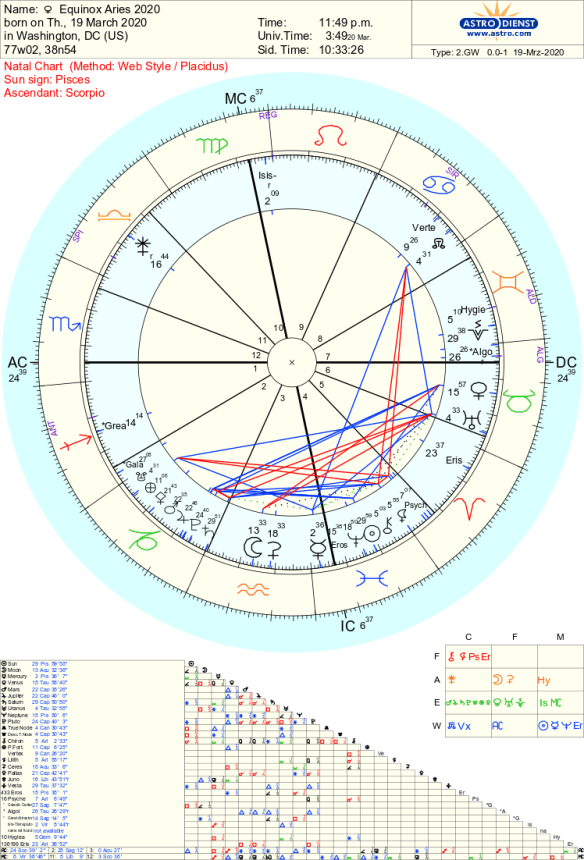 “It was the best of times, it was the worst of times,
it was the age of wisdom, it was the age of foolishness,
it was the epoch of belief, it was the epoch of incredulity,
it was the season of Light, it was the season of Darkness,
it was the spring of hope, it was the winter of despair, we had everything before us, we had nothing before us, we were all going direct to Heaven, we were all going direct the other way – in short, the period was so far like the present period, that some of its noisiest authorities insisted on its being received, for good for good or for evil, in the superlative degree of comparison only.”- Charles Dickens A Tale of two Cities, written about the French revolution.
“I, Alexander Manette, unfortunate physician, native of Beauvais, and afterwards resident in Paris, write this melancholy paper in my my doleful cell in the Bastille, during the last month of the year 1767.”
Synchronistically I erected transits of today and lo and behold, Neptune the planet of viruses, projections, self-sabotage and debt, was at 7 Virgo on the MC. of today’s Equinox in Washington DC.
Saturn was at 0 Cancer conjunct the North Node now. Pluto was at 11 Capricorn conjunct the Part of Fortune in this chart.
Uranus planet of Revolution was at 28 Taurus, conjunct AGOL the fixed star with the worst reputation, in 1767 just before the French Revolution. It is now squaring Saturn Mars Jupiter Pluto now.
SUN is conjunct CHIRON the Wounded Healer, in the 4th house of Home and family, nurturing and the need for emotional safety, indicating the self-quarantine phase because of Covid-19 and a period of intense vulnerability focussed on healing.
VENUS in her ruling Feminine sign of Taurus at powerful 15 degrees squares the Moon in Aquarius conjunct CERES in the 3rd house showing the social distancing detached mood and the need to communicate by social media. Keep the focus on a higher purpose of all this.
CHIRON conjunct LILITH at 5 ARIES is squaring the NODES OF FATE
Women will be in full Amazon battle mode, reclaiming their sexuality, aggressively defending their rights as equals, full of power and mad as hell into 2021. What’s at 5 Aries in your chart? I’ve got Jupiter.
Please join me LIVE on FACEBOOK on my Page Tara Greene Tarot Psychic Astrology March 20 at 5:30 pm PDT/ 8:30 pm EDT and March 21 at 12:30 am GMT i will be talking about 2020, Covid-19 and answering questions about your astrology charts, Join me. https://business.facebook.com/Tara-Greene-Tarot-Psychic-Astrology-Consultant-193065840714514/
I wish you all a HAPPY SPRING and the est of 2020.
Please share widely all writing is copyright of Tara Greene
get a reading http://www.taratarot.com
https://en.wikiquote.org/wiki/A_Tale_of_Two_Cities