Look at your past relationships, which Jupiter in Libra Retrograde symbolizes, through the positive lens of Mercury in Aquarius. These two planets harmonious blend offers a detached “futuristic” vision into other possibilities and realms. Other ways of relating, balancing and interacting with others on all levels becomes clear and easy to do.

Sun conjuncts the South Node of the Moon in Pisces

This only happens once a year. The South Node of the Moon and the Sun brings light to our unconscious memories.  This is an optimum time to connect with the past, your history; both personal and cultural/collective histories so that we may learn from the past.

You know that old adage:  “Those who cannot remember the past are condemned to repeat it.”George Santayana wrote in The Life of Reason, 1905.  Truer words could not be more important to remember right now.

The 12th house is the treasure trove of everything from the past. All of our past life memories, and our connection to the collective unconscious, a vast resource of knowledge, the akashic records, our dreams, our regrets, our unfulfilled desires, our projections, illusions and delusions, our spirit guides, angels and ancestors who love us, our source, our spiritual knowing is all available to us always and today most especially.

Get CLEAR. Allow the Sun to pour clear light through your unconscious illusions of separation from Source. You have never left the “Garden of Eden.” You have never been separate from the SOURCE. This is merely a game, a thought, an idea of Goddess/God, a play of what If?  All that we think is real in the Universe is merely a flash of consciousness. You are so much more and we are all so much more than that.

No one is tied to their past. We are all here to experience, grow, expand, evolve and return. The Sun is opposite to the NORTH NODE, our present highest spiritual goal in Virgo. Go forwards, do not stay stuck in ignorance, or powerlessness or projections. Do not play small. Get in touch with your egolessness, this makes you enlightened. Then power means nothing.  Do not let any outside authority define for you what God is or why you are here. You have those answers in your very DNA, in all of your cellular memories. There is no thing, no god or Goddess, no quest, no conquering, no journey, no jihad, there is nothing outside of you Self to find. The Beloved is within you, has always been, always will be. We are all INFINITE STARS of LOVE.

The Beloved is within you, has always been, always will be. We are all INFINITE STARS of LOVE. The Solar Eclipse in PISCES on the 26th will help us to know that truly.

Get clear today. You will need to.The 22nd 2/22 is a very powerful day for me. I will post my article about this.

MARS  SQUARES PLUTO on the 22nd it could be a very intense day.

Please share widely, all writing is copyright of TARA GREENE

get a reading with Tara http://www.taratarot.com

I love art. Everyone has a secret desire to be an artist. Admit it. To be an artist is to live creatively, to live life freely. I started out as an artist, I went to Art High School and Art College. I had shows in New York , Los Angeles and Toronto.

Everyone Loves Banksy, he is a very  clever man, Did you see the film Exit Through the Gift Shop? Banksy made it about Mr. Brainwash. This is not about street art but about an artist who does amazing work.

this is a promotional ART Blogpost. 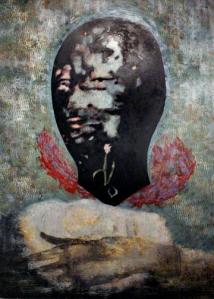 Napoleon Brouseau’s talents are enormous. He lived in New York years ago and knew Jean-Michel Basquiat and Andy Warhol. He met Frederico Fellini, worked on the Pee Wee Herman TV show building props. He was an art director at Area Nightclub for some time.

Napoleon has paint in his veins. He is the real deal, he has lived the artists life fully and has wonderful and funny stories to tell. He should have been killed about five times already and survived because he has a destiny as an artist to keep creating to keep bringing his soul into manifestation. It takes tenacity to really live like a true artist. Plus he is that very rare artist who is also a nice guy.

His talents are vast and deep, he is always pushing his own edge. Collector’s need to find him, because his time is NOW>

At the opening of this show other artists and gallerists were exclaiming that each painting was museum quality.

They really need to be seen as the layers of surface are scintillating. They are like modern Rembrandt portraits. Really!

Yes the Frida Kahlo show is on at the Art Gallery of Ontario, she is my female art heroine. Napoleon is my art hero.

A series of 19 portrait paintings of apparitions

from the imaginal realms

Passing the hues and objects of the world,

The fields of art and learning, pleasure, sense,

The poster boy for the show, Mr. B. appears from a dream dimension of his own, portrayed as a bulbous reflective death mask floating ominously over a ghostly Michael Jackson skull. Mister Bitumen is the phantom of future passed inspired by the environmental damage caused by the Alberta Tar Sands.

Each portrait contains a powerful presence and reveals its’ subjects’ own idiosyncratic essence. Brousseau spent several years painting in what he calls trance and meditation states stalking these eidolons and phantoms that he has pinned down in his paintings. 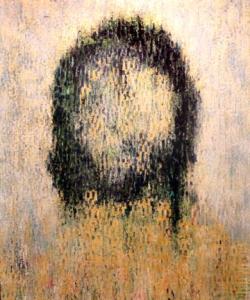 There is the eidolon of Jesus Christ; in another, Abraham Lincoln appears and disappears through a chain link fence, the dividing poverty line. Other portraits are of beings from realms unknown. They appear to be looking curiously at the viewer, pushing forward from their space, trying to enter into our dimension. 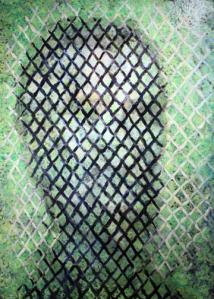 Brousseau created the works through a long meditative process. The painting are created using his own applied techniques.  He used many types of hand cut rollers with repeated images and applies multiple layers of paint to find the ghostly images. Once they reveal themselves, they are sealed in epoxy. The painting surface, is ground down then he rolls, grinds and brushes over and over in layers in search of more details. It’s like an archaeological dig.

Each painting is a dazzling show stopper. These beguiling phantoms and memories enchant the viewer, leaving an indelible impression.

Napoleon Brousseau is well known in Toronto for his giant ant sculptures that adorn the Museum of Canadian Contemporary Art in Toronto and The Cameron House, a famous local art bar.  Brousseau continuously produces astonishing new bodies of work in various mediums. He explores many themes -gender, politics, eroticism, and nature. His works always confronts the viewer with his distinctive perspective of seeing the world.

For the last seven years Brousseau has been the Art Director for his new media eco fundraising project “SEED”, which transforms cell phones into interactive artist tools. The public co-creates virtual trees with their phones which directly contributes funds to planting real trees in urban settings. Seed has been presented at the Winter Olympics 2010, Canada, the U.S., China, Australia and at The McMichael Art Gallery in Kleinburg 2012. A dedicated artist, he is a world traveller and is producing several books from his drawings of exotic explorations.

This is a must see show, the small Bloor Street West gallery barely can contain the energy and the presence of the work.

GALLERY HOURS: TUESDAY TO SATURDAY 11 AM TO 6 PM