All equinoxes are power gateways. This is a doubly charged SUPER FULL MOON, It is a super Moon when the moon is closest to the earth, The Libra Full Moon occurs on the ARIES Equinox when the Sun is exactly over the equator making day and night equal. In the Northern, Hemisphere Spring begins and in the Southern Autumn starts.

The zero degree points of the 4 seasons are power gateways.

The solstice occurs on the Same day as a Super Full Worm Moon a rare occurrence which hasn’t happened since March 20, 2000, and before then March 20, 1981. This is the last Super Moon until 2020.

The Equinox chart itself is a very powerful one to take into consideration as it is the Natural New year and you can use it as a 3 month go to chart.  There is so much going on here. We will be in the thick of it sorting it all out like the miller’s daughter in Rumpelstiltskin who has to spin all the wheat into gold in one night or Psyche having to sort out all the tiny seeds.

Make New intentions at this Supercharged Equinox. Equinox is always about the balance and the cosmos is super attempting to tell us to balance big time. 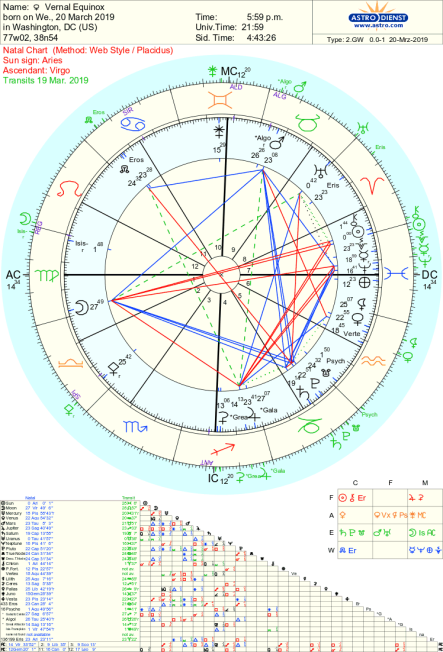 Earlier in the day all that Virgo fuzz budgeting. Dreams will be strong, you will want to get lots organized but Mercury Retrograde may have you feeling like you need to climb out of a bog especially later today when Mercury in Pisces sextiles Saturn in Capricorn.

The Moon is in VIRGO at 27 degrees squaring Galactic Center.  and trining Pluto.

There will be belt-tightening and a rational approach to connecting to the cosmos in order to feel empowered.

THE SUN iS CONJUNCT CHIRON

When a new world is being birthed labor is painful.

WHERE DOESN’T IT HURT?

The wounds of war and the patriarchal warrior way are obviously hurting everyone. Violence, terrorism, paranoia, and anger are where we are clearly at in the world today.  Men have to look at this warrior mode of life and decide to challenge and change it to benefit everyone. Women too. We cannot accept the patriarchal standards which go against every fiber of the Divine Feminine’s longing for nurturing and preserving life. The Full Moon will come up to attempt to bring a balance into the worldview and our personal views. We have been living so out of balance. This is a new world coming into existence here.

Mercury is Retrograde in PISCES

Information is misinformed, missing, secreted away, misunderstood or simply illusions delusions, and projections. truly false news, and its causing mental illness, and drug addictions, apathy and denial. Yet astonishing secrets and scandals keep revealing themselves. What kind of glamour soup of lies are we swimming in?

Venus is the symbol of The EMPRESS #3 in the Tarot

in Aquarius she is detached, intelligence, focussed on the new, modern, revolutionary freedom and equality.
Venus is conjunct LILITH  and trining Athena in Libra

Venus will not collaborate, whatsoever even in  Aquarius which is all about teamwork. She is strategizing a new way for women to be in the world.

This is powerful energy to be embodied to enjoy being on the earth plane to have clear goals and the patience and persistence to climb to the top.

JUPITER in Sagittarius is squaring Neptune, Mercury and Vesta exactly  and the SUN

Truth-telling and investigating history is imperative for us to clear up the detritus, fog, misaligned focus on reality Tv show lived lives on the adulation of vacuous, glamorous Illuminati run movie stars and the multiple other ways in which our lives have been circumvented by religions, culture, and now the attempts to rewrite history.

SATURN in conjunct PLUTO which is conjunct the SOUTH NODE

It is time for a huge karmic flush.  This is a very good thing. We need to examine our own motives our own histories and our own urge for power.

We need to evolve towards the North Node in Cancer

The U.S. Sibley chart has Mercury at 24 Cancer. Very interesting. Cancer is the Mother principle The great mother who loves unconditionally who keeps safe her children and family who nourished her babies and provides comfort. As the Motherland what is the U.S. or any country doing to Protect nurture keep safe and comfort feed and support its citizens?

Moon squares Jupiter in Sagittarius so tell your truth and leave no stone unturned.

do mundane things during the day and focus on releasing the past year. Review it.

The ARIES point is the major point in the zodiac. Take the next 4 hours to meditate and plant seeds, dance, create, stay in a special zone to be ready to welcome the new.

in TAURUS MARS is in VENUS’ home sign where the planet is considered weak. Mars in Taurus is concerned with physical, practical sensuous, money-making, art, and beauty. This is grounded energy. Mars is sextile the North Node. He is helping to protect the family.

We are here to balance the Masculine and Feminine

Venus takes the reigns from Mars.  Ideally, they must come to a balance of the masculine and feminine.

Practical matters may be somewhat off-kilter,

There may be hurt feeling to sooth.

The VENUS MARS Squares is hours later on the 21st.

The battle of the egos begins.  Both planets are in fixed signs. The issue of how to co-operate is the main one here.