The SUN at 14/15 degrees SAGITTARIUS is conjunct to the GREAT ATTRACTOR a GALACTIC anomaly of immense proportions. If you have planets Rising, moon or other planets connected to this amazing thing you can literally attract whatever you want.

My intuition always guides to me to what I need. I am referring back to my old hand made copy of Alex Miller-Mignone’s The Black Hole Book, self-published in 1995. 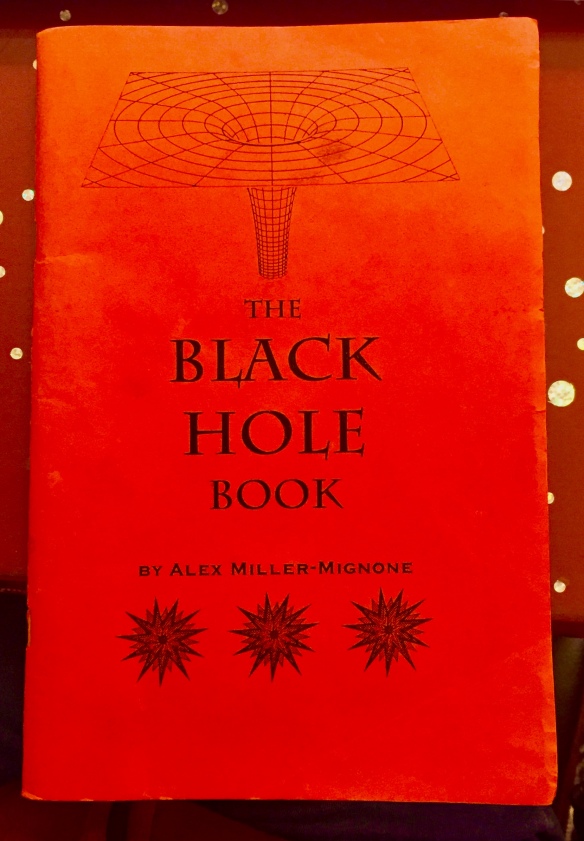 THINk about these multi-dimensional portals affecting us under the billionaire’s transit of Jupiter and Pluto in Capricorn. Are you feeling it?

Get a reading with me my readings are 25% discounted http://www.taratarot.com

Please donate to support my writing here. https://www.taratarot.com/astrology   thanks

Katie Bouman is the young PH D Grad from MIT who is responsible for developing the algorithm that created the 1st ever image of a SUPERMASSIVE Black hole, shown live April 10 2019 at 9:00 am EDT for the very first time. Black Hole Telescope was the first ever worldwide co-operative project aimed on photographing a Black Hole in Messier-87, or M87 a massive supergiant elliptical galaxy, near the Virgo galaxy cluster 55 million light-years from Earth  The supermassive black hole has a mass that is 6.5 billion times that of our sun and is referred to as The Super Galactic Center.

Deep Space astrologer Philip Sedgwick describes M87  as representing a “massive hunger” in which nothing is ever enough,triggering an egoistic materialistic desire for more material possessions, which sounds like the basis of modern consumer capitalist culture, which in turn can create a physical, emotional or spiritual black hole. But that desire can be quickly transformed, “Once integrated, those directly involved with the Super Galactic Centre become directly as a central force of healing in the loves of unimaginable numbers of people”  Sedgwick M87 ” DEMANDS THAT YOU GET IN THERE AND DEAL WITH YOURSELF IN AN ESSENTIAL MANNER.

If  you didn’t hear about this world-wide event you can read up on it. I wont go into the details about what Black Holes are -links below.

In astrology The Super Galactic Center is located at 1+ degrees of LIBRA, coinciding with the Autumnal Equinox and opposite to the Vernal Equinox and 0 Aries the beginning of the Zodiac. M87 is the Omega to Aries Alpha and literally the balance.

Katie was born May 9, 1989 in West Lafayette Indiana – no birth time according to a bio. I’ve used Noon for a public figure.

I wanted to check out her astrology chart and see if specific Galactic alignments showed up in her chart. 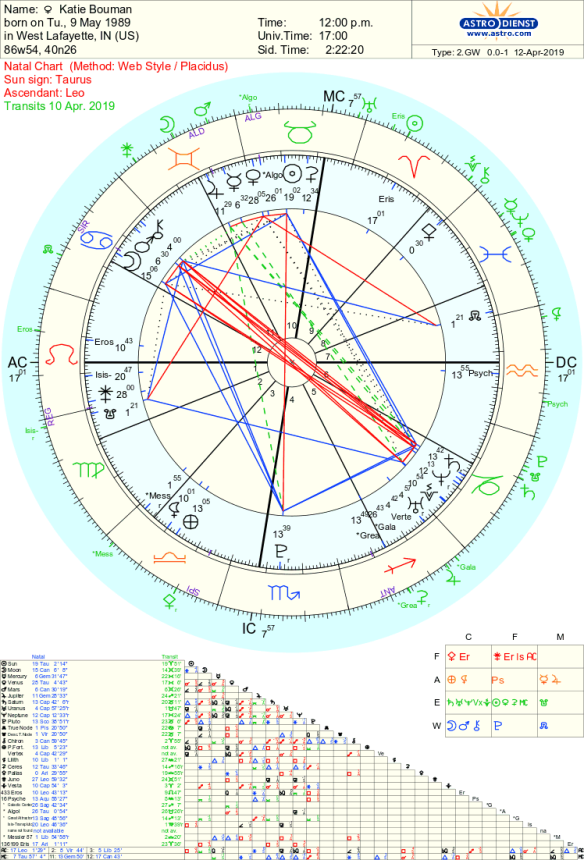 Katie is a practical stubborn focussed TAURUS with CERES, the dwarf planet conjunct to her rock solid Sun. Katie’s Sun is conjunct to Dwarf Planet CERES the Great Mother, Katie’s Sol is connected to creation and birthing of new practical things. Whatever she is “bullish” on she will nurture and protect.

Sun is opposite to PLUTO in SCORPIO planet of research, detective work, laser vision, secret things, power, death and rebirth, control and finances.

Without an exact birth time the degrees of Katie’s MOON must be estimated from  9 degrees CANCER the Moons most natural and ruling house, to -21 degrees Cancer. The moon moves on average 1 degree every 2 hours. The Moon in Cancer in a woman’s chart symbolizes the mothering and nurturing principles. It is what she conceives of, is pregnant with, births,nurses, and nurtures on all levels. Not just babies, but any project or creation.

Katie’s Moon is opposite SATURN in Hard working Capricorn planet of physical building, karma, fathers, history, heavy things, fate and maturity and conjunct to Neptune planet of dreams, spirituality, the end of all things, which is what a Black Hole certainly is.

Jupiter expands everything it touches. Herr thinking and analysis function is working at full steam. Katie is intensely curious loves to communicate, she gave a TED TALK two and a half years ago about this project and her hopes of it happening. She has the gift of the gab and thinks very fast.

Katie has VENUS planet of women, values, love and self-worth conjunct to the Pleiades at 28 Taurus the famed 7 sisters who bring intuitive higher knowledge and protection. Venus is also conjunct to Algol the famed Medusa’s Head which I believe is the Positive feminine planet of Amazon warrioresses. This aspect brings her a fearlessness to work in a man’s world.

Sure enough, right after she was singled out as one of the Few female Dr’s who was so important for this project a bunch of incel misogynists created a fake instagram and fake FB profiles to put Katie down/ https://www.dailymail.co.uk/news/article-6917089/Male-scientist-helped-capture-black-hole-photo-defends-Katie-Bouman-sexist-trolls.html

MARS and CHIRON in early Cancer is opposite URANUS

Katie’s great passion, her Mars, the technology-Uranus in Capricorn- to see into new worlds and go beyond the known into the unknown. As a woman in a man’s world she obviously feels wounded but has used it to fuel her desires.

the GA is the most massive and unknown Galactic so far. The Great Attractor is a magnet for ours and a whole slew of other galaxies. It bends light so we can see beyond. It is a gift for those with foresight to be connected to this Deep Space anomaly.

Katie has had to work incredibly long hours to prove herself in a male dominated world or astrophysicists.

Katie also has planet URANUS planet of new-technology, telescopes, inventions, pioneering, cutting edge things, group work, management and Higher consciousness in Capricorn,conjunct to SATURN and NEPTUNE and conjunct to Asteroid VESTA the dedicated focus to keep the flame burning at all costs. Vesta symbolizes investments- financial, emotional, physical and spiritual. This stellium of planets in Capricorn certainly symbolizes Katie’s ambitions. Neptune rules Photography and the patience and vision it took for her to help birth this project.

Juno also squares her VENUS in Taurus giving her extra oomph to succeed in the world as a women. Her Juno is conjunct to her SOUTH NODE in VIRGO at 1 degree. IN a past or her early family story was of hard work, modesty, budgeting, the value of learning and information. She is very organized, possible OCD with a good memory, she loves to read. Katies North Node in PISCES indicates she is a very compassionate spiritual, dreamy, charitable person who is modest.

This shows how the Black Hole and using new technology for pioneering and inventing a collective Uranian other worldly project using her Athenian battles strategy- is in her chart at birth.  These three points also tie into her natal Chiron in Cancer, this is her baby.

Katie has experienced her 1st Saturn return in the past few months. This is her fated time to be a fully fledged adult. Saturn makes one work hard but brings great rewards for lots of hard work patience and diligence. Her Saturn in its natural Capricorn home has seemed to have rewarded her.

ON APRIL 10 2019 the planet URANUS at 1 degree TAURUS  planet of new technologies and outer space discoveries forms a “finger of God’ or Yod with Katie’s North Node in Pisces which point to MESSIER- 87 that supermassive Black Hole.

“It’s Messier work but someone’s got to do it.” must be Katie’s bad pun motto?

NEPTUNE planet of dreams and photography at 17 Pisces is conjunct Venus and squaring Kate’s Jupiter, planet of expansion, fortune and higher learning in Gemini.

The Sun, the source of all light is squaring Saturn Pluto and the Nodes.

This is a karmic fated time. Sun in Aries is always a new fiery pioneering beginning. We are leaving behind old outworn systems. Saturn’s nature is heavy like those black holes which swallows all matter like the famed Saturn or Chronos did to his children in the Greek Myths. Pluto is also symbolic of death, a black hole obliterates all light. The two planets are associated with the color black.

Chiron the Wounded Healer at 3 degree ARIES is opposed to M87  having your portrait taken naked means you are vulnerable. This an amazing new beginning for humanity to stretch so far back in time to see what I call the cosmic Womb in action.

read more on the science

PLease share widely all writing is copyright of Tara Greene. Get a reading with me http://www.taratarot.com

There are huge Galactic things going on. But you know that you can feel it. Right?

JUPITER the largest planet in our Milky Way Solar System is checking into the Galactic SHAPLEY SUPER 8 CLUSTER Motel October 21. What does that mean to us earthlings and the other planets and Galactics?

The Shapley SuperCluster contains the hugest gravitational magnet of galaxies known as Shapley 8. AKA Abell 3558 it is located @ 2+ degrees Scorpio Tropical in the Virgo Supercluster in Sidereal when referenced to the ecliptic.

The Number 8 is INFNITY when turned on its side.

I find the reference to the name Abel significant as it is the birth first name of a current Superstar singer from Toronto who’s hit record Star Boy was made into a marvel Comic book recently called -what else? Star Boy. The conjunction happens this Weeknd.

The Shapley Super Cluster is the largest concentration of galaxies in our nearby universe that forms a gravitationally interacting unit, pulling itself together instead of expanding with the universe. It looks like a very dense cloud in the distribution of galaxies in the constellation of Centaurus. It is 650 million light years away.

Shapley * is one of the most widely researched of all the Galaxies. First discovered in 1930 by Harlow Shapley an American Astro-physicist.

Shapley 8 guides the GA in the Universe like an offstage puppet master. The cosmic Octopii pulls the GA, which draws in our local group and our solar system to it.

Our little local MILKY WAY GALAXY is held in place by the Galactic Center at 27 degrees SAGITTARIUS which is a huge black hole-the Galactic Yoni- esoterically a wormhole. For example of how powerful the G.A. is Black Moon Lilith the “i refuse to be dominated by any man” Lilith was the first woman archetype created from God directly with Adam. She was before Eve a man made creation. Lilith is currently broadcasting from the Galactic Center right now. The #MeToo campaign is proof of that.

The other major galactic dynamics are the Great Attractor @ 14+ degrees SAGITTARIUS a gigantic gravitational anomaly in intergalactic space at the center of the Laniakea Supercluster a localized concentration of mass tens of thousands of times more massive than the Milky Way. Neptune is currently orbiting in a square which will get more intense in 2018 to the G.A.

We are being invisibly magnetically connecting to a huge spiritual Source. Is it a Giant Spider weaving the web of existence as Lakota Legends tell?

All of this past week all I have heard of is  E.T.’s Greys Andromedans. Lyrians Arcturians Draconians. etc. Do you believe in E.T’s?

This is a big opportunity to tune in my friends. We are still in DARK MOON energy. The Orionids meteor shows which the great pyramids are connected to are raining down as well.

It feels like a huge Galactic uploading is going on.

Let yourself be pulled into the mystery.

Let me know what your dreams reveal tonight as Scorpio Moon trines Neptune.

get a reading with me www.taratarot.com

For fun, check out http://www.atlasoftheuniverse.com/superc.html.