A Virgo Partial Solar Eclipse on Sept 12/13 @ 20+degrees is an extra powerful DARK or New Moon. It is also being touted as the end of a 7 year Shemitah cycle and as a major world market crash by Canadian anarcho-capitalist entrepreneur Jeff Berwick. The shemitah has been touted up by Rabbi Jonathan Cahn whose books and videos have gone viral and sold in the millions. Many Christian rapturists believe the end is near.

WHAT IS THE SHEMITAH?

Every seven years G-d told the Israelites to leave their land fallow for an entire year and to forgive all debts. This is what a Shemitah cycle is.There used to be a Jubilee year 7 x 7= 49 in the 50th year but this is not being observed in Israel anymore. The ancient tradition is being applied now to this Shemitah cycle.

The laws of 7 year cycles are governed by the planet Saturn, the concrete reality, karmic cosmic cop.  Yes it is true that going back every 7 years to the days during Rosh Hashanah to Yom Kippur in the Jewish calendar there has been great stock market collapses and big power plays in the world. Always in the autumn.

1938 Shemtiah, Hitler begins to escalate and take over foreign territory

1930-31 Shemitah was also the biggest crash in the Depression

1917  Shemitah year when the U.S. entered the First World war and Turkish and other countries were divided up

You get the idea. The Dow has dropped about 10% in the last few weeks because of China devalued its Yuen.

The big financial controllers in the world can use all of this numerology symbolism and astrology learning to stage these types of crashes as well. People make money when the market crashes. The Federal Reserve has moved to Chicago because of fear of a natural disaster.

The Jewish New Year of Rosh Hashanah begins at sunset September 13. Which is the end of the Shemitah. Jeff Berwick is talking about Jade Helm in the U.S. until September 15, The Pope will also be in the States and meeting with world leaders. The U.N. is having a Jubilee Year, and New World Order meetings are set September 15-27.

The eclipse will only have limited visibility in the Antarctic and parts of South America and does affect the areas where it is visible although we will all feel it.

All eclipses are measured in cycles and each one reoccurs at the same degrees every 18+ YEARS.

A VIRGO Partial Eclipse is a new beginning, a new seed being planted in the earth, for the earth, the environment and her humble servants. It is a sign of service,and servants. of the have-nots, the peasants, the impoverished , worldwide. That’s a huge amount of people.

Virgo is the VIRGIN Goddess. Women as a whole are the most downtrodden in the entire world. They are enslaved by false religious beliefs to serve men for the last 5,000 years. Virgo is a mutable sign, organizing, perfectionist, workaholics, accountability, discipline, thrifty. Virgo is concerned with food, health, daily routine, diet, especially the upper intestines, and digestion.

Because the cycles of 7 repeat. I intuitively decided to include Asteroid # 777, names Gutemburga after the inventor of the Printing Press Johannes Gutenberg. It is at 4 degree of Pisces conjunct to Neptune and opposite to Jupiter and is widely squaring Saturn.

Time should be 6:41 a.m. for eclipse. The software is not accounting for daylight savings.

The chart shows SUN + MOON in the 12th house the house of the hidden, the house of endings, secrets, self-undoing, institutions, jails, the hermit, spirituality, dreaming, escapism.

VIRGO is the 6th sign. In the tarot it is related to Pentacles, Discs, coins, money. Virgo is the sign of the accountant. A lot of the energy is focussed on the economy crashing.

Ceres the Great Earth Mother, is in Capricorn trining the Sun and Moon. We must get corporate leaders to change environmental laws but not those fake taxes designed by the plutocracy to rob the poor.

Sun and Moon are opposite Chiron the wounded healer in Pisces and certainly our global hearts were wounded, vulnerable and opened with compassion for the drowned Syrian toddler last week. Many individuals are attempting to support refugees fleeing Assad’s cruel assassination of his own people.

Will be prominent in the news next year. There may be major food shortages.  URANUS the planet of we’re all on the same playing field, hi tech, revolution and freedom is Inconjunct or Quincunx to the SUN and Moon. Dwarf Planet ERIS, the Goddess of BITCHING, kvetching and trouble making is conjunct Uranus too. This is a difficult energy to handle. It is playing with Fire. It can be used to topple our horrible food industries in Canada and the U.S.  The Revolution will be around what we eat. No GMO’s. Banning Monsanto and the food controllers in the world. Eating local. Alternative co-operative greenhouses and farmland will become popular.

Mercury is the planet which rules this eclipse. Mercury is at the 15th degree of Libra, reigniting the last Cardinal Crosses in March of this year. Mercury is opposing Uranus and squared by Pluto Retrograde. Diplomacy, finding a balance, equality, justice, corporate politics, freedom of individuals these are all hot topics.

Sun and Moon are conjunct to JUNO, the Feminine sign of Genius. Her 8 armed symbol, like the Hindu Goddess reflects to me, a woman’s way of genius, multi-tasking, holistic. We need this feminine Genius to clean up the mess in the environment.

The North Node is at zero degrees of LIBRA, one of the four Cardinal Points of the year. N.N.  Is conjunct to LILITH on the Ascendant indicating that the DARK FEMININE, the Rejected Feminine is what is rising at this time. Lilith is God’s left hand of severity, the right side being the Shekinah the side of blessings. Lilith is like Kali energy.

This is a huge aspect. Jupiter and Neptune only meet in opposition in the Virgo/Pisces polarity once every Century. Virgo is homeland and Pisces is dissolution. The last time Jupiter/Neptune aligned like this was in 1939 during the Spanish Civil War.  Jewish refugees were also fleeing Germany. Irish immigrants were forced to leave during the potato famine in 1849. Their exact opposition is September 16.

Yes I would see this also as the THE REALITY CHECK in the economy and the world. What have we harvested? Karma. V.s. What lies and deceptions we have believed?  Neptune rules DEBT, and the trillions of real debt the U.S. owes has reached its limits. The cupboard is actually bare. The people will get poor and turn to drugs, sex, reality TV to escape the harsh times ahead.

Saturn the LORD OF SEVENS, is at the very last critical degree of Scorpio. He is the Grim Reaper and he is at his most intense. Scorpio rules financial markets, taxes, big money. Scorpio is death. Pluto is making a nice earth trine to Jupiter, the Sun and Moon helping the cause.

Venus and Mars are still very close to each other and the passion, will and belief in self and relationships is high. Except that Venus is Inconjunct to Pluto. What needs to die will be taken away.

Also important is that this eclipse degree is only 3-4 degrees away from 16-17 degrees Virgo conjunction of Uranus and Pluto which spawned the Cultural Revolution of the 60′ s. Note Chiron is also re-triggering these degrees. Remember the revolution was seeded then. NOW it is taking root and growing. Late terminal capitalism is the real issue now. You can ascribe it to Biblical prophesy if you wish. 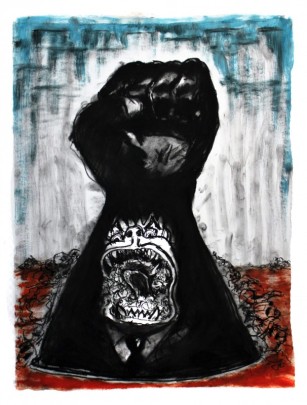 At this New Moon

Eclipse cycles affects lasts up to a year.Look at what needs to end in your life, what no longer serves your higher purpose. Virgo is the sign of the Gardner, the tender of the earth. How tender are yo to Her? She is your mother. What is it you want to harvest now and how do you want the earth to be?

Are you in love with your work? Do you feel your life is a life of service to others? Can you let go of your need for stuff, and being identified by status, relationships, ego toys and money?

Stay true to your gut instincts, a Virgo thing. Be very mindful of what you eat. A great time to adopt a new diet and exercise routine. Think about doing for others rather than yourself.

All writing is copyright of Tara Greene

Art works by Napoleon Brousseau print will be available on Saatchi shortly:  http://www.saatchiart.com/brewsoul

Pease SUBSCRIBE to this blog for only  $2 a month http://www.taratarot.com/id181.html