Kirk_Douglas_1963 Photographer-Henry Grossman, New York [Public domain] in One Flew Over The Cuckoo’s Nest on Broadway

Kirk Douglas is an incredible actor, a living legend from Hollywood’s Golden days and one of the last survivors of that era. His life is literally a rag’s to riches story as he was brought up in abject poverty a  Jewish immigrant family’s son. His father was a rag picker.

Douglas turned a remarkable 103 years old on December 9th  and I was curious to look at his astrology chart.

You can go to Wikipedia to read up on the Hollywood legend https://en.wikipedia.org/wiki/Kirk_Douglas 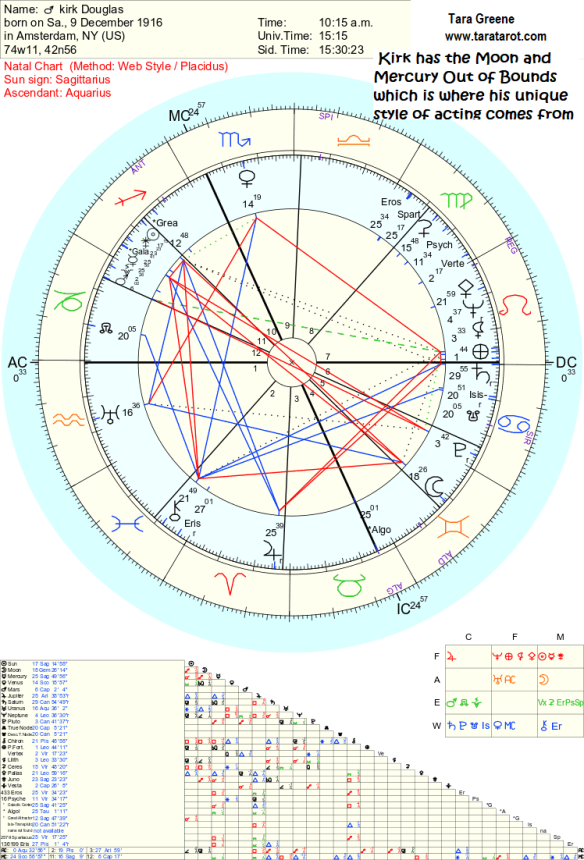 Kirk is a Sagittarius Born on A full Moon with the Moon in communicative planet Gemini and Mercury also in Sagittarius close to the Sun. Sagittarius is an easy-going higher truth teacher traveller philosopher comedic sign.

The chart has an AA Lois Rodden rating giving Kirk a 0 degree Aquarius ascendant but I would rectify it back a few minutes to 10:12  am because it makes more sense for someone of Kirk’s longevity to have a 29 degree Capricorn Ascendant. 10:15 is a rounded-off number. The 29th degree of all signs is considered to be the most intense. It is called the anaretic degree and it means “destroyer ” in Greek. Kirk Douglas has a  reputation of being an extremely intense actor, whose intensity is often self-destructive.

Kirk has Saturn planetary ruler of Capricorn on his DC opposite his Ascendant at 29 degrees Cancer. The 29th degree shows up here as well. Saturn is longevity, stature, status, the father. This is what gives Kirk his long-lived genes. Capricorn’s get younger as they get older because they have learned from the school of hard knocks when young. Saturn in Cancer is a deeply emotional and traditional man. He also survived a stroke years ago.

Kirk had 4 sons from 2 marriages, one son Eric died a few years ago. Of course, Kirk is the father of another famous actor his eldest son Michael Douglas  who as he ages looks more and more like hid handsome father. Michael has acted on Television and many films directed many movies and won academy awards himself. Douglas is currently starring in a fab Netflix series called the Kominsky Methos which he co-stars with veteran actor Alan Arkin and which is wonderfully written and very funny.

Kirk has plenty of charisma and he has Venus as the highest elevated planet in Sexy brooding obsessive Scorpio naturally.  His Venus is squaring his Nodes fo Fate

Kirk’s MC or highest PUBLIC ACCLAIM IS SCORPIO and we can see Kirk’s intensity and obsessive focus which he brought to many many films.

What really astounded me was that Kirk was born with both the Moon and Mercury Out Of Bounds. This is a relatively recent astrological definition. The Moon and the planets move beyond the tilt of the earth’s axis which is 23 degrees 28 minutes. The Sun never moves beyond those boundaries.

Kirks’ Mercury is at 25 degrees Sagittarius conjunct to the Galactic Center and opposite the North Star at 25 Gemini This also gives Kirk the amazing magnetic personality.

When a planet’s declination exceeds 23°28′ North or South, it is described as being Out of Bounds. According to astrologer Steven Forrest, the OOB Moon gives people the ability to be wold free independent.  Ditto for mercury-free thinkers.

Mars the planet of passion is in Capricorn a serious weighty solid passion in his 12th house of the unconscious. He starred in One flew Over the Cuckoo’s Nest on Broadway after buying the rights to the Book from Author Ken Kesey. His son Michael Douglas directed the film which won Jack Nicholson an Academy award.

NEPTUNE the planet which governs Hollywood actors, film, projection and mages is in LEO the sign of Stars, leaders and drama in his 7th house of marriage and all “others” close to his Saturn. Kirk certainly has longevity and projects weight. One of the most remarkable things about him as an actor is his ability to project that heavy reality as he inhabits a character.

I could say more but these were the most profound characteristics that jumped out at me.

Wishing you  Should live to be 120 as they say in the Jewish blessing.

read about the Out of Bounds Moon from Steven Forrest https://www.forrestastrology.com/blogs/astrology/the-out-of-bounds-moon