The HEART CHAKRA of the earth is being blasted with Interplanetary shock waves-May 27-30th The scientific analysis is shown below at BP Earthwatch website.  https://www.bpearthwatch.com/

INTERPLANETARY SHOCK WAVE HITS EARTH: A minor interplanetary shock wave hit Earth on May 26th at approximately 22:00 UT. The CME-like disturbance was unexpected. It caused the density of the solar wind around Earth to abruptly quadruple, while the interplanetary magnetic field doubled in strength. Earth’s magnetosphere was rattled by the impact, but it did not spark a geomagnetic storm.

Since yesterday I have been feeling tired, exhausted and with my heart chakra literally aching. All of my body was aching. I kept asking myself what it was. I rested as much as I could. Then I went on Twitter and asked if other empaths and sensitives were feeling it to. Someone directed me to another psychic who reworded the Interplanetary shockwave from BP earthwatch’s video.

The influx of interplanetary shield bending shock waves affects all of us, some of us feel it much more than others will continue until the 30th. It seems to have lowered later today. We have to wait and see. Do tune in to what this change in the earth’s field is all about.

The Big 8.0 earthquake in PERU is now on the Heart Chakra of the earth according to Drunvalo Melchizadek who discovered the  Sacred geometry of the Flower of Life.  This tells me that we are being bombarded to wake up the heart chakras and the Heart Chakra of Mother Earth up.
Read my Instagram post posted here.
All writing is copyright of Tara Greene
get a reading http://www.taratarot.com 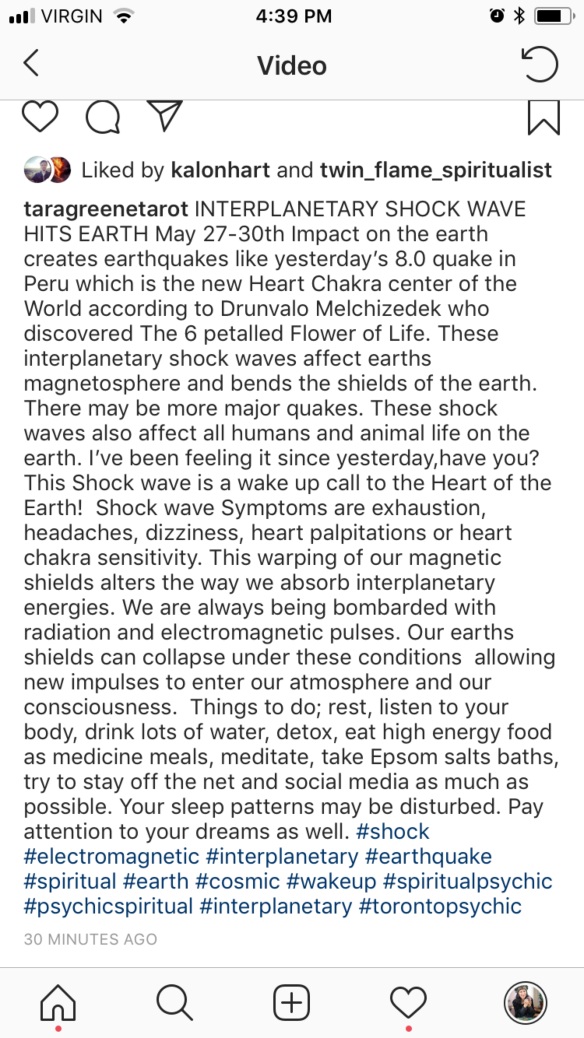