Kanye West went on a recent rant at TMZ on May 1st saying “When you hear about slavery for 400 years,” he said. “For 400 years? That sounds like a choice. You were there for 400 years and it’s all of y’all. It’s like we’re mentally in prison. I like the word prison because slavery goes too direct to the idea of blacks. Slavery is to blacks as the Holocaust is to Jews. Prison is something that unites as one race, blacks, and whites, that we’re the human race.”

And West has been going on about loving Trump and wearing a MAGA cap too.

I understand what he is trying to say philosophically. The statement that mental slavery is a choice didn’t go down very well.

West drew the ire of millions of people on Twitter. He revealed he got hooked on opioids after getting liposuction and that he is on some form of medication to keep him mentally “balanced.” Kanye was rapping wildly and cancelled his Saint Pablo tour on Nov. 19, 2016, and appeared to have a mental or emotional breakdown and hospitalized himself on Nov. 21, 2016. Some people say the Illuminati hospitalized him and could have reprogrammed him. He was obviously overweight and seemed out of it until recently from the meds. 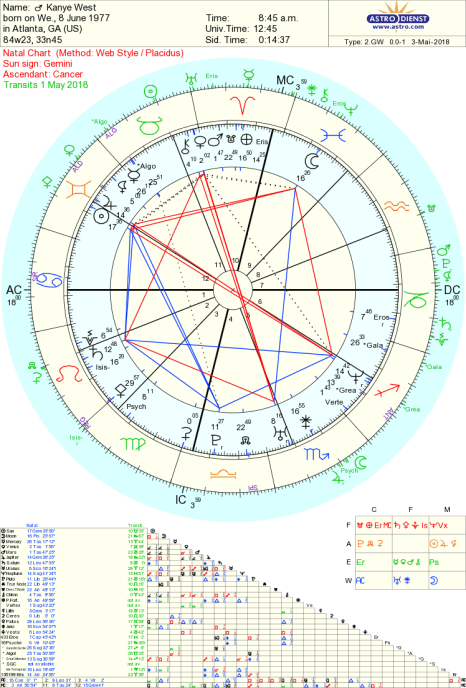 Kanye is a GEMINI, with Jupiter the planet of expansion, optimism, higher learning, teaching, philosophy, faith and good fortune expanding his Gemini curiousity driven nature for the better and for worse. Kanye-like Donald Trump also a Gemini, has two sides to his personality. He can be an angel and a devil one minute to the next. He likes to play devil’s advocate. He has a great gift of the gab and is a great communicator. He could sell anything to anyone that is a Gemini trait. Gemini’s are known as Tricksters, ruled by planet Mercury-the mercurial quick change impossible to hold onto metal. kanye is like a big kid who is never supposed to grow up. He is great at getting P.R. See he done it again.

SUN JUPITER opposite NEPTUNE in SAGITTARIUS on the Great Attractor

Kanye is a very creative man. Authentically mystical spiritual can be easily delusional and project his own unconscious nature out into the world. He is very sensitive to drugs and must be careful about anything he takes. He can literally attract anything he wants to himself. He was born very fortunate. He is totally and involuntarily honest saying too much and getting himself in trouble.

“This is a God dream.” is a totally Pisces Moon statement to make. He is an actor and plays roles.

He was very close to his mother Kanye idealized his mother and projects that-Pisces Moon- onto all women in his life. He is a nurturer very emotional moody sensitive. A man who wants to protect his family and children. He is a nurturer. His home is everything.

He is rather androgynous with a Mars-Venus conjunction appearing whole and complete. He is brash spontaneous fiery sensuous passionate and doesn’t think before he speaks. In this way, he admires Donald Trump for the same characteristics. Kanye is quite driven by luxury and material success. He loves beauty in all its forms. This is the garden of Eden for him. Taurus’s hate change and he is extremely stubborn. He is independent strong-willed and is meant to be the boss. But he is also very vulnerable and wounded.

This is very much a wildcard energy. The man can spontaneously erupt from the depth of that Scorpio unconscious creating havoc. He likes to be in control but its gotta be his way. He is a unique individual and always felt different.

He talks about beauty tangible things. He accumulates wealth and loves beautiful women. He is a very sensual person and perceives the world viscerally.

Saturn in Leo in his 2nd house of resources

He sees himself seriously as the Sun King the performer the star. He wants to be seen as royal. He takes his ego very seriously.  He has a big heart and is very generous to those he loves. He is an actor. Donald Trumps Pluto is at 12 degrees Leo conjunct Kanye’s Saturn. They have avery karmic connection. Trump may have been Kanye’s father in a past life or vice versa. They both lust after power and wealth.

Pluto in Libra in his 4th house

His soul is very private. His connection to his mother and his privacy are very important. Pluto trines his Sun/Jupiter conjunction making his existence powerful. He needs to find himself through a serious committed relationship of equals.

Kanye’s highest spiritual goal is to find peace in his creativity his artistry and in his marriage. Ironically the chart shows he has already known fame-perhaps as a soldier and fighter with Mars conjunct South Node. His unconscious past life drive to be famous is something which his soul knows about it is not where he really needs to go to evolve.

PLUTO on his DESCENDANT squaring his North and South Node

Pluto is the soul itself and our soul purpose. Pluto sitting on Kanye’s Descendant one of the 4 major angles in any astrology chart effects the way he interacts with the world and in his Marriage-this cusp is the entry into the 7th, marriage house. Pluto tends to unconsciously erupt and destroys the normal status quo. Pluto will also be squaring Kanye’s North and South Nodes of Fate. This is a once in a lifetime transit. This could be Kanye’s greatest success or his downfall. He is leaving his past behind consciously or unconsciously. Ideally, Kanye must navigate to his North Node in the most private spot in his chart the 4th house of self which also symbolizes endings childhood his home and mother.

Kanye may actually be on drugs and may become more psychotic.

URANUS planet of revolutions freedom chaos and Higher consciousness will conjunct his MARS VENUS and CHIRON this year and into 2019.

Kanye will be speaking in alien tongues to most people. This is not status quo and he will be very stubborn and won’t back down from anything he says. He is trying to incite a revolution and at least a reaction. Speaking to those who understand his revolutionary rhetoric. Is he mad or ahead of his time? He is needing to free himself up. He talked about freedom of speech.

This aspect is just starting will continue into 2019. It’s very creative for an artist or spiritual person and enhances psychic abilities but can also be a delusional or self-appointed guru or believes that God is speaking to him directly. He is hypersensitive to drugs and should avoid taking them at this time. He is a chameleon who morphs into whoever he is with. Debt is also a big problem at this time. He is off on another planet.

We will see how this plays out for Kanye. I actually have grown to like and respect some of his music and his real artistic side. He is not status quo and I respect him for that and he has some very catchy riffs.