There is a galactic message from the Great Mother, appearing as an asteroid {aka dwarf-planet} in the skies above, along with a spectacular green comet LOVEJOY as we close out 2014. The real astronomical cycles are also symbolic archetypal messages.

What does this mean? Kind of like the Queen’s New Years message on a much higher cosmic level. You have to decipher how to get it. It’s a DIY. I will help you.

Ceres, is the Roman name for the Great Earth Mother Goddess, called Demeter in the Greek myths, she is the living symbol of NATURE herself. She was the the first discovered asteroid on, January 1, 1801. It’s almost her 214th birthday since we have reawakened to her  primal cosmic presence again. Name destiny has brought her archetypal significance into our awareness.

Astronomers re-classified her as a dwarf planet as she is the largest of the asteroids. I don’t like the sound of the great mother being dwarfed in any form.

Ceres is on the GALACTIC CENTER exactly on New Year’s Eve 2014 at 26 degrees 52 minutes of Sagittarius.

Physically the G.C. is a massive source of radiation, specifically infra-red radiation This is related to the root chakra, primal fears, the infrared energy is felt in our subconscious minds.  The G.C. is the broadcast system for the cosmos, it is here when you tune in and meditate that you hear God/ Goddess/the great creator/Central Cosmic Intelligence speaking through your open mind. It is very easy to tune in. Just simply turn your internal satelite dish to it. C lear your mind and heart and ask to learn and know.

This is Sagittarius territory and Saturn is newly in the sign of HIGHER LEARNING now with a short pause in mid June to mid September  2015 to do the final soul cleanup camp in the last degrees of Scorpio. Then it will be all serious, focussed, real spiritual lessons until  2017 with no drugs needed.

That is also Saturn square Neptune, coming up now and for the next few months and again in the fall. Addictions, reality, dreams, the ineffable.

This is the great Maw, void, Cosmic VAGINA, black hole, Vesica Pisces, the opening of XIBALBA to the Mayans, “place of fear and death and rebirth.”

Set aside some time to rest and reflect. Create an alter, a ceremonial space. Use candals, sandalwood or sage, or smudge.

Go out and look at it the MILKY WAY if it is visible where you are. The great rift is easy to see in higher clear unpolluted light areas. Or imagine it.

Breathe, open your  heart and send your breath down from your lungs, down your spine, and down your legs through your feet and into the earth and down past the rocks to the fiery core of the physical earth mother. You need to feel very rooted and very grounded first.

Give thanks to Mother earth. Send her your love and wait till she answers you back. She will. Then pull all the fiery energy up with your intention from the earth’s core, up through the soles of your feet  and through your spine up through your 6th and 7th chakras, at the top of your head and send it out to the Galactic Center. It should only takes moments for this to happen.

Then tune into the infrared radio waves emitting from the Black Hole. That is home. This is where all life was birthed from in the Galaxy. The vagina/ Galactic center  is the cosmic symbol that everything is born of the Feminine. It is the most sacred space, this darkness, and it is to be the highest honored, respected and reverenced, the most Holy of spaces.

Relax, feel the safety, allow your consciousness and your  heart to hear open and receive the Great Mother’s Divine message for you for your new year.

Ask the GREAT GODDESS to give her your earthly/cosmic mission and directions on how you can serve the Divine Feminine fully.

Another auspicious omen is the presence of COMET LOVEJOY  appearing again visible to the naked eye with binocs as a beautiful GREEN COMET with a long tail. It reminds me of a  Quetzal Bird the famous phoenix like bird of the Mayan indians.

Traditionally comets were always considered harbingers of bad omens. But again NAME DESTINY wins. The cosmic banner message in the sky above, to us here below, says

in green, the color of the HEART CHAKRA.  The emerald-green ray is associated with the 4th chakra of Archangel RAPHAEL.  The green also signifies the Hindu/Tibetan Green Tara, Goddess of MERCY.

Comet lovejoy will continue to be visible for the first two weeks in January.

“It is in and among the favorite northern winter constellations now, currently in front of the constellation Lepus the Hare. Use the charts above to find it. Luckily, it’s passing near Orion, which is one of the sky’s easiest constellations to spot. The most noticeable thing about Orion is its short, straight row of three medium-bright stars, known as Orion’s Belt. Find these stars, and you’re on your way to seeing the comet! Orion is a very spiritual group of stars. It will be closest to the earth on January 7th.

I will write more about my changeling with COMET LOVEJOY over the next week. I can really feel the energy fluttering in my heart. Two very blessed events to begin the New year with. 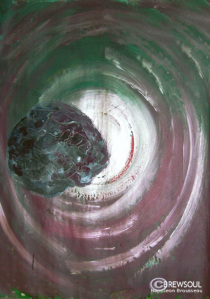 HAPPY NEW YEAR to all.

All writing is copyright of Tara Greene.

Get a reading with TARA GREENE http://www.taratarot.com

come to Sedona ARIZONA for a spiritual workshop in the Spring of 2015 with Pamela Gerrand and Tara Greene; email taragreenetarot@gmail.com

LOVE IS ALL- by Pamela Jane Gerrand