Yes there are mixed messages and two locations set for KK and KW’s big wedding MAY 24 and a French air traffic controller’s strike now thrown in the mix for good measure. Things may not turn out so grand.

NOTE TO SELF-Don’t plan a wedding when under a MARS Retrograde.

Whether the actual wedding ceremony is in Forte di Belvedere a Medici palace in Florence Italy, where their daughter North was conceived or in VERSAILLES Paris , lets see what the marriage day looks like.

I am not a fan of KK and KW. I never watch reality TV shows and don’t really like Kanye’s music. I am merely curious about the astrological signs on their wedding day and what their two charts looks like.

I swear they have consulted an Astrologer to plan their wedding date because it’s a VERY FORTUITOUS date.

I can’t assume any specific time so am keeping it on a Natural House system with ARIES ascendant.

YOU CAN SEE the GRAND WATER TRINE in BLUE

between JUPITER  SATURN and CHIRON- this is a very positive aspect, symbolizing a very traditional, close knit, private, homebody, fertile family from Jupiter in Cancer,who love to eat.

You can see the GRAND CARDINAL CROSS is also in effect.

Pluto is opposite Jupiter,squaring MARS in LIBRA- sign of marriage with MOON which is always the emotions, the unconscious influence in passionate, spontaneous combustion ARIES,conjunct URANUS- a dangerous, highly flammable aspect. They are wedding under very dramatic  energies.

MOON OPPOSITE MARS is a very  difficult aspect, one which speaks of many arguments, always fighting over who is boss and with URANUS there – there will never be a dull moment. Chaos, unexpected interruptions, incendiary, very unpredictable.

The SUN is in GEMINI that dual sign of charm, lots of talking, sales, childishness, inability to make decisions, duplicity, two faced. Kanye is  a GEMINI it’s his first marriage.

MERCURY is in GEMINI

the sign it rules so the communications are excellent, and there will be endless data plans needed as talking is lite and lively. Nothing too serious intellectually.  ASTEROID AMOR is conjunct Mercury. Ah that’s sweet and romantic.

VENUS conjuncts the SOUTH NODE at 28 degrees of ARIES

giving this marriage a very significant PAST LIFE influence and meaning. Asteroid CUPID is conjunct the SOUTH NODE VENUS connection. VERY FATED. They feel like they have been together before.

NEPTUNE is the planet of SouL mates and this brings a lovely spiritual higher love element to the dualistic energy of the Gemini SUN/identity.

NEPTUNE is quincunx to MARS

which represents fantasy and illusion, delusion, and addictions around desire, the ego, sexuality, masculine energy, action, and the inability to drop defenses in the marriage. A lot of projection going on here. They see weird stars in each others’ eyes. They think they are the stars in heaven who everyone looks to.

WHo is the boss will be a prominent theme? Who wears the pants in the family? Mars in LIBRA is not strong but is seeking peace, harmony and balance.

GENERALLY, this is a very positive wedding day chart.

Let’s look at the two of them together 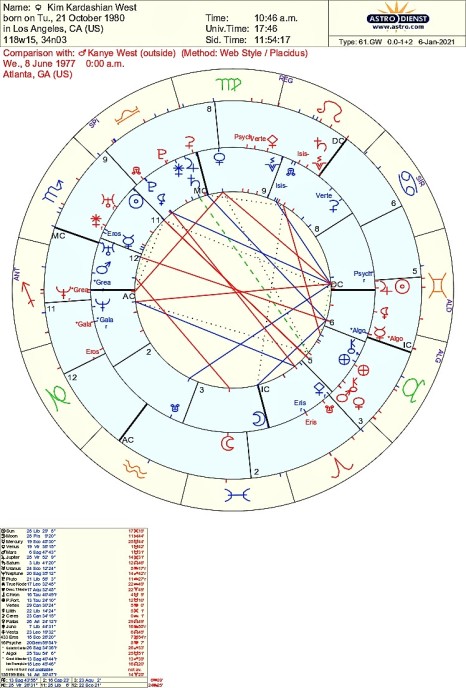 Kanye has a VENUS MARS  CHIRON CONJUNCTION in TAURUS in his natal Chart.

He is very romantic, sensual, has great taste, is very creative,  loves beautiful things, is great with money, very romantic. Asteroid CUPID is nearby in late ARIES. The planets of LOVE and SEX are directly opposite to KIM’s SUN in late LIBRA.

THEY BOTH have their MOON’s in PISCES

They telepathically understand and communicate with each other. They are both very sympathetic, dreamy, seeking the soul mate, twin flame, creative, spiritual,sensitive, compassionate, OTHER. They are emotionally private would you believe?  They can be very giving to each other, and feel as though they are two halves of a whole. They are both chameleons, adapting to the other. Their life is like one big fantasy role-playing game. It sure looks that way  doesn’t it?  They project each others deepest hidden unconscious emotional needs onto the other.

gives him the gift of the gab, he is a “magician” his mind is always racing, he is charming, childlike, wealthy, positive. Kanye’s SUN is opposite Kim’s NEPTUNE-planet of HIGHER LOVE. Her Neptune squares his MOON which is directly opposite her VENUS IN VIRGO. This is a super romantic combo. They feel like true soul mates.  They are also acting as ARCHETYPAL images for the collective’s projections.

Most significantly her PLUTO LILITH is also conjunct to Kanye’s NORTH NODE in LIBRA.

I know they have an ASTROLOGER now because they named their daughter NORTH not just because it was a cute pun on his last name but because of this most significant connection.

PLUTO is the SOUL and North NODE is also related to the highest spiritual goal of marriage in LIBRA. This conjunction with PLUTO is also a very FATED, DESTINY connection.THEY KNEW IT right away.

This is also a very KARMIC CONNECTION. Kanye is really the king to Kim but she is also leading him into his highest heart- Leo rules the heart- expression, as a father, being mature, ruling his own family. Kanye may have been her father in a past life or acts as a father figure, protector, possessor and authority or wise guide for her and helps her find her heart’s expression. Yes, they are both “royalty.”

HER JUPITER SATURN Juno CONJUNCTION in LIBRA is conjunct to his PLUTO and to his CERES.

Kim definitely has wealth privilege and power. THEY expand that making it richer, vaster. CERES brings a protective, nurturing mothering element into Kim’s life and also literally making her a mother. CERES also indicates that Kanye may have been her mother or a nurturing figure to her.

She must have very weird kinky sexual proclivities.THIS is lightning sexuality, no wonder she exudes that energy. The woman is a walking sex bombshell literally. Mercury is communication and URANUS is collective technology – explaining the why of her reality show. His Mercury is in receptivity exactly opposite.

WELL, the collective is fascinated with these two celebrities famous for not that much except surface beauty,or money and turning them into Gods and Goddesses. BUT the two definitely have a beautiful connection. They are most definitely soul mates. It is quite positive for people to watch this fantasy of finding their true soul mate and having a fairy tale wedding. It gives people hope. They are simply a projection of many people’s desires. I Wish them and their daughter the best of blessings.

P.S. Kim is very ripe to get pregnant very quickly in July or August.

All writing is copyright of Tara Greene

GET your chart scoped, need a special date? http://www.taratarot.com